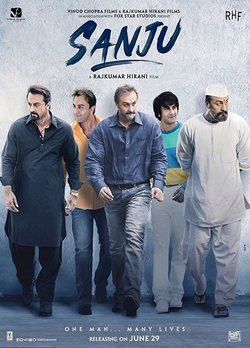 An Indian biopic based upon the life of actor, Sanjay Dutt. Ranbir Kapoor is to play the lead as the actor, whilst Dutt himself is rumoured to make an appearance. The biopic is directed and produced by RajKumar Hirani and Vidhu Vinod Chopra, respectively. The former also wrote the screenplay. Originally titled the ?Dutt Biopic?, the name was subsequently changed to that of ?Sanju?: the actor is affectionately known by the nickname by others in the industry. Joining Kapoor will be Manisha Kaoirala who?ll play Dutt?s mother and Paresh Rawal as his father. Dutt?s wife, Maanayata will be played by Diya Mirza. Sonam Kapoor and Anushka Sharma are also rumoured to have parts in the upcoming biopic.

?
Write your own 'Sanju' review.