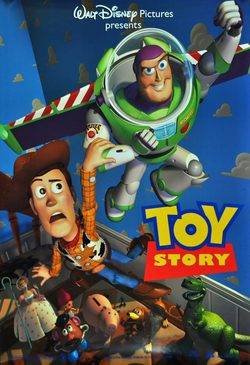 Andy is a child who play with his toys all the time, especially with Woody, a cowboy that is his favorite toy. What Andy doesn't know is that their toys actually have their own life. When Andy's birthday arrives, their toys are terrified by the arrival of a toy that can replace them, all except Woody, who, aware that it is Andy's favorite, isn't worried at all. However, the legacy of the new toy Buzz Lightyear action will endanger the life of Woody as we know. As Buzz is becoming gradually Andy's favorite toy Woody ... moving into the background. But when Andy and his mother will go to the famous pizzeria called Pizza Planet and her mother says she has to choose one toy to take, Woody establish a plan to be chosen by him Andy. But when the plan backfires and Buzz falls out the window. He should do everything possible to bring him back, since everyone thinks it was on purpose.

?
Write your own 'Toy Story' review.