Adelaide Wilson (Lupita Nyong'o, 'Black Panther') returns to her home city in Santa Cruz, on the coast of California, along with her husband Gabe (Winston Duke, 'Black Panther', 'Modern Family') and her two young children including her son Jason (Evan Alex), who hides his face behind a monster mask, in what she thought would be her dream vacation. Back in her hometown, Adelaide struggles to socialise, particularly with the white Tyler family headed by Kitty (Elisabeth Moss, 'The Handmaid's Tale') and Josh (Tim Heidecker 'The Trial') that Gabe envies. After an incident at the beach, Adelaide and the rest of the family go back to the house to rest. At nightfall, they spot a terrifying sight: four mysterious figures holding hands and standing near the entrance of the property. They try to kick them off the premises, when suddenly they attack and the family realise in horror that they are facing four evil copies of themselves. With a score written by Michael Abels accompanying Jordan Peele's direction and script, 'Us' is the socially-conscious horror film follow up to Peele's critically acclaimed 'Get Out' (2017). Joining the cast are Shahadi Wright Joseph, Yahya Abdul-Mateen II, Anna Diop, Cali Sheldon, Noelle Sheldon and Madison Curry. Hide full plot... Show full plot 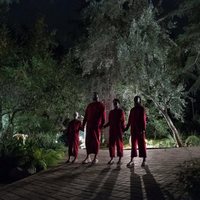 Jordan Peele gave the cast ten horror films to watch so they would have "a shared language" when filming: 'Dead Again' (1991), 'The Shining' (1980), 'The Babadook' (2014), 'It Follows' (2014), 'A Tale of Two Sisters' (2003), 'The Birds' (1963), 'Funny Games' (1997), 'Martyrs' (2008), 'Let the Right One In' (2008), and 'The Sixth Sense' (1999). When creating Red's signature voice, Lupita Nyong'o was inspired by a condition called spasmodic dysphonia. The condition is characterized by intense vocal spasms causing breaks and interruptions in speech, as well as strained speech that is difficult to hear. Lupita Nyong'o, Winston Duke, and Yahya Abdul-Mateen II all attended the Yale School of Drama. Nyong'o and Duke were classmates.