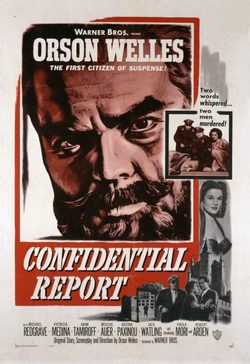 Guy Van Stratten is a middling American smuggler who is working on the European continent. Unwittingly, he witnesses a murder. When going to help the poor victim, the dying man said something in a whisper. These are two names that will be of great value. One of them is the mysterious Gregory Arkadin. Along with Milly, Van Stratten use that information and create a network of plots and rumors in order to get to know the enigmatic Mr. Arkadin. This quirky billionaire entrusted a strange mission: To investigate his own past that, according to comments mogul, he has forgotten it. This will make that Van Stratten is going to travel around the world willing to find each of the pieces of the puzzle that is the life of Arkadin and so rebuild his memories. Directed by Orson Welles, this action-packed thriller is directed by Robert Arden, Patricia Medina, Paola Mori, Michael Redgrave and Welles himself. Released in 1955.

?
Write your own 'Confidential Report' review.