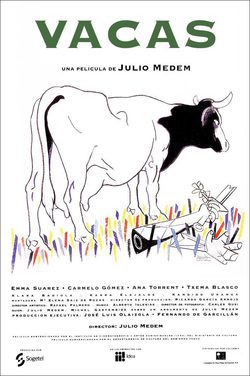 Julio Medem directs 'Cows', a film set in the Basque region, beginning in the Carlist war of 1875 and ending during the Spanish Civil war of 1936. The film portrays how one single act of cowardice shapes the life of the next three generations of two families and fuels the intense rivalry which will span the next sixty-one years. Carmelo Gómez, Emma Suárez, Ana Torrent and Karra Elejalde are the main stars of this film which had 4 nominations in the Goya Awards of 1992, and it won the Gold Awards in the Tokyo International Film Festival

?
Write your own 'Cows' review.