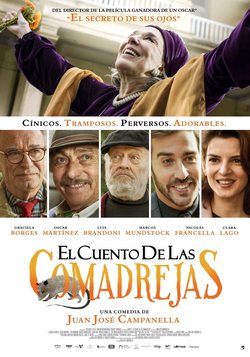 Based on the 1976 Argentinian movie 'Yesterday's Guys Used No Arsenic', 'The Weasel's Tale' is a black comedy developed almost completely in a countryside mansion. There they live, since four decades ago, Mara Ordaz (Graciela Borges), an actress, diva, and star in the Argentinian cinema golden age who still lives in that period. She lives with her husband Pedro de Córdova (Luis Brandoni), also an old actor, less successful than his wife, who during his last years turned the plastic arts into his main occupation. The marriage shares the house with two friends: Norberto Imbert (Óscar Martínez), one of the directors who directed Mara more times; and Martín Saravia (Marcos Mundstock), an important writer. Nonetheless, the life of this group will soon be threatened by Bárbara (Clara Lago) and Francisco (Nicolás Francella). Lovely and charming in the beginning, both of them will become some kind of intruders who want to keep the mansion and incorporate to their real estate business. This will provoke the angry reactions of the owners, who will get together against this affront. A film made by Juan José Campanella, who gets back to direct real actors and actresses almost ten years after the release of 'The Secret in Their Eyes'. Hide full plot... Show full plot

?
Write your own 'The Weasel's Tale' review.