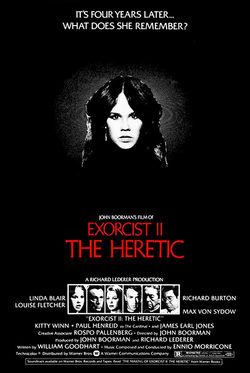 Four years after her bout of demonic possession, Regan MacNeil seems at peace as she enjoys a privileged but lonely adolescence. Her actress mother, absent on-location, leaves her in the care of her childhood nanny, Sharon, who feels inextricably bound to her young charge despite the terror she endured during the girl's possession. Regan attends frequent counseling sessions with Dr. Gene Tuskin, an unorthodox psychologist who believes Regan remembers more of her ordeal than she admits. Meanwhile, Father Lamont, a protégé of the priest who died exorcising Regan, is called to investigate the death of his mentor. The Church is divided over the teachings of Father Merrin and wants to gather documentation of his views about demonic existence. Father Lamont himself is conflicted -- haunted by images of a possessed woman he could not save. As he and Dr. Tuskin become convinced that the demon still exhibits a hold on Regan, the priest sojourns to Africa in search of Kokuma, who as a boy was possessed by the same demon and exorcised by Father Merrin. Learning the true name and ancient origins of his supernatural foe, Lamont returns to America to stage a climactic battle for Regan's soul.

?
Write your own 'Exorcist II: The Heretic' review.