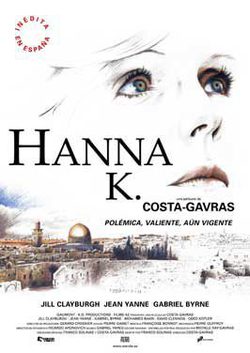 The director Costa Gavras maintains that reflection on history often show in his works on a film in which the fiction plays a leading role, as the situation in the Middle East provides a framework for an intense romance between a woman looking for its identity that, after having a child with an Israeli, wants to leave him to be with a young Palestinian. The role of women in society, with its new freedoms and slaveries, merges with the political conflict in the area resulting in a film that highlights the compelling reasons of both parties stating that only considering that the two fronts have a point they would succeed in laying the foundations for lasting peace. Jill Clayburgh gives life to the lawyer who is hopelessly attracted to his client, a young man who doesn't represent love but a symbol because what Hanna craves is freedom.