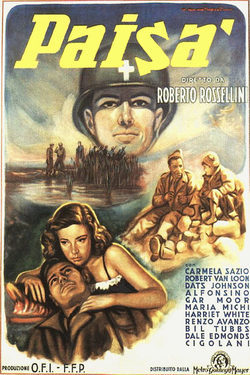 Six separate episodes with the common bond of advancing Allied troops in Italy during the Second World War, from the invasion of July 1943 until the winter of 1944. A woman leads a group of Allied soldiers through a minefield and dies while trying to protect one of them. A street urchin steals an American soldier who pursues him to a shanty town. A soldier meets a woman the same day that Rome is released and six months later they meet again, he is a cynical and she is a prostitute. An American nurse travels across the Arno in the middle of the German fire to find the partisan of who is in love. Three chaplains, one Jewish, take refuge in a monastery at the north of the Apennines. Allied soldiers and a partisan attempt to escape through the swamps of the river Po.

?
Write your own 'Paisan' review.