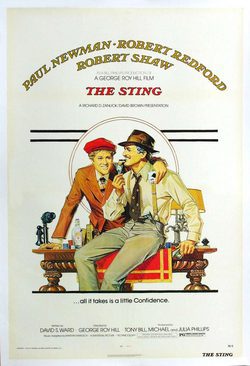 Johnny Hooker is a young con-man who is being taught by Luther. One day they pull one of their con jobs and net themselves a huge roll. What they don't know is that the man they conned is the courier for a numbers runner. And it turns out that the boss, Doyle Lonigan, considers it an attack on him and orders all the people involved terminated. Hooker is shaken down by a crooked cop, Snyder, who threatens to turn him over to Lonigan unless he pays him off. Hooker pays him, he then tries to warn Luther but is too late. He then goes to see Henry Gondorf, a friend of Luther's and a one time great con-man, who has had a bit of bad luck. After hearing what happened to Luther and seeing how hungry Hooker is for payback, he assembles a gang and decides to con Lonigan. While everything seems to be going ok, there is just the problem of the hit on Hooker and Snyder, whom Hooker paid off with counterfeit money.

?
Write your own 'The Sting' review.