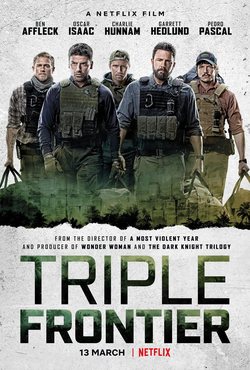 Special forces operative Santiago "Pope" Garcia (Oscar Isaac, 'Star Wars') has spent the three years prior to the start of the movie trying to catch a drug lord working about the Triple Frontier between Argentina, Brazil and Paraguay. When Pope uncovers not only his location in the Brazilian jungle but also where the drug lord keeps his funds, he decides to call on his former colleagues, many of whom are not working 'normal' jobs at home in the United States, to carry out the heist he has planned. Making up the team are Tom "Redfly" Davis (Ben Affleck, 'Gone Girl', 'Good Will Hunting'), a former commander working as a real estate agent; Ben Miller (Garrett Hedlund, 'Mosaic', 'On the Road'), who spends most of his time wrestling; William "Ironhead" Miller (Charlie Hunnam, 'Sons of Anarchy') and Francisco "Catfish" Morales (Pedro Pascal, 'Game of Thrones'). The five men's army careers have trained them to bottle up emotion to the point of detrimental effects, yet an emotional sense of brotherhood is reignited on this mission together. Directed by J.C. Chandor ('A Most Violet Year', 'All is Lost'), 'Triple Frontier' balances action, adventure and thrills with a reflection on the poor treatment of veterans by the United States government. 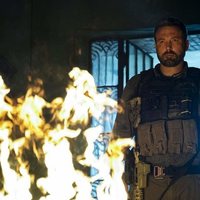 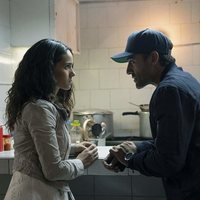 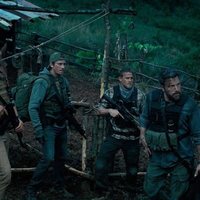 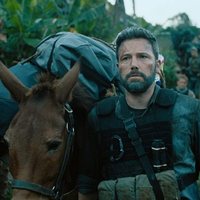 ?
Write your own 'Triple Frontier' review.

Kathryn Bigelow was going to direct the movie but left to work on 'Detroit'. In 2010, Johnny Depp and Tom Hanks were in talks to star in the project but negotiations fell through over the course. Later, producers approached Will Smith to star but those early negotiations quickly fell through as Smith went on to do other projects. Also, Denzel Washington, Sean Penn and Mark Wahlberg were once in negotiations to star in the film. At one time both Casey and Ben Affleck were going to star in Netflix's production of 'Triple Frontier' but dropped out. Ben signed back onto the project in 2018. Charlie Hunnam was also attached to this project then dropped out and rejoined this project later.