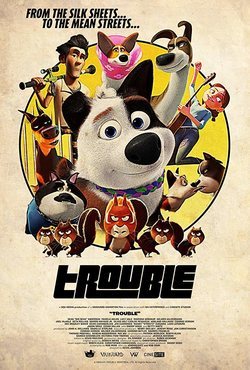 The life of a spoiled dog named Trouble changes completely when his rich owner dies. He is now alone in the streets of a large city for the first time in his life. However, Trouble is lucky to ran into a young woman named Zoe who decides to help him by taking him home. Trouble will have to learn to live in the real world and will have to face some problems: the owner left all her fortune to him before she died, so now he must escape from the greedy children, who angry about this situation, all they want is to use it to collect the inheritance. 'Trouble' is a co-production between Canada and the United States and is directed by Kevin Johnson who already has experience working in animation films. Johnson has been part of the animation department for films such as 'Asterix in America', 'The Pagemaster', 'The Iron Giant', 'Alvin and the Chipmunks: Chipwrecked' and 'Thumbelina'. The original idea of the film is by Jordan Katz and Judah Miller and is written by Rob Muir, John Paul Murphy and Harland Williams. In the original version of 'Trouble' the voices of the characters are from Conrad Vernon ('Shrek', 'Monsters vs. Aliens'), Lucy Hale ('Pretty Little Liars', 'Truth or Dare'), Big Sean ('Love, Simon', 'American Honey'), Damon Wayans Jr. ('New Girl', 'Let's Be Cops'), Olivia Holt ('Spider-Man', 'Runaways'), Cesar Millan ('Dog Whisperer with Cesar Millan'), Wilmer Valderrama ('That '70s Show') and rapper Snoop Dogg. 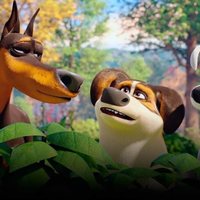 ?
Write your own 'Trouble' review.