Under the Lighthouse Dancing 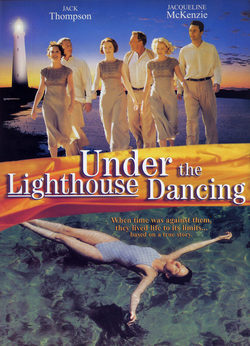 Harry and his much-younger girlfriend surprise their friends one vacation weekend by announcing their desire to marry immediately. As they are visiting a small island village off the coast of west Australia, that is easier said than done. The weekend began with the aforementioned couple and their friends Louise and David sailing out to Rocknest Island to visit their friends Garth, a doctor, and Juliet. The island is truly beautiful, as is the watercolor-like cinematography, and everyone has a good time. It is Emma who drops the bomb, and even Harry is surprised, for he has made no plans for their ceremony. It turns out that neither of the island ministers can do the job on such short notice. Emma then drops another bomb, telling them that she is terminally ill.

Cast Under the Lighthouse Dancing