'Star Wars' gives in to toxic fans: the case of Kelly Marie Tran is the saddest thing about this trilogy

*This article reveals some important details regarding the plot of 'Star Wars: The Rise of Skywalker'.

In one of the many twists in 'Star Wars: The Rise of Skywalker', C-3PO loses his memory. The second most beloved droid of the saga (after R2-D2, of course) is forced to format his hard drive (for some cheap excuse that the script explains very little, defends even less, and certainly doesn't deserve to be remembered), for which reason he spends a considerable part of the film accompanying the other characters, who are now complete strangers to him, on a journey in which he is surprised by everything unfolding around him and won't stop cracking jokes. Suddenly, his cylindrical little friend reinstalls his memory with a back-up drive that he'd been keeping handy. The process is identical to when you back-up your phone and sometimes have lost your most recent photos: C-3PO remembers nothing that took place after the end of 'The Force Awakens'. Through this little plot twist, Lucasfilm drops a wink at the fans who have spent two years ranting and raving about 'The Last Jedi', the previous episode of the saga directed by Rian Johnson: "we can't delete this film that you all hate so much from our records, but at least we've wiped C-3PO's memory". 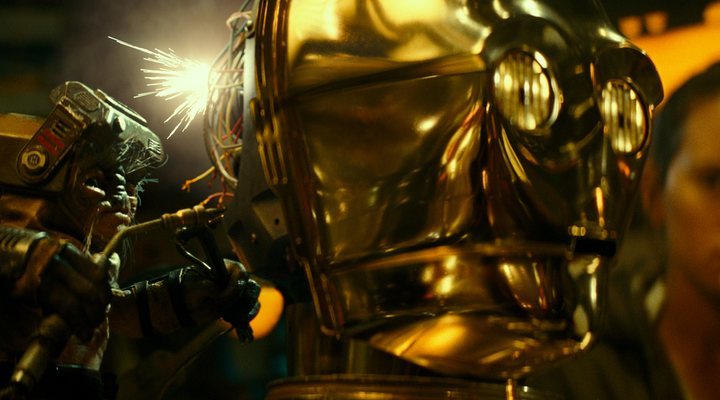 The production company, with Kathleen Kennedy at its helm and a filmmaker lacking in original ideas of his own such as J.J. Abrams driving this particular spacecraft, thus ended up positioning themselves on the side of those who turned their nose up at the blatant feminist messages of Episode VII and who were ready to burn down every Jedi temple in existence after watching Episode VIII, the most rebellious and subversive film in 40 years of the saga. The script of Episode IX, written by Abrams and Chris Terrio (who, after winning the Oscar for 'Argo', has worked on two collaborations with DC and this project), makes many questionable decisions, but the worse of all of them is the the plot surrounding Rose Tico.

The character played by Kelly Marie Tran was first introduced in 'The Last Jedi' through which the Vietnamese actress became the first non-Caucasian woman to hold a principal role in 'Star Wars'. Rose was a mechanic for the Resistance, played by Tran with an abundance of energy and enthusiasm which made her into one of the main providers of comic relief in the film, an angle that didn't work for many viewers, like many of the novelties introduced in this trilogy. It wasn't long before Rose Tico became a symbol of everything certain fans hated about Rian Johnson's film. Less than a week after the release of 'The Last Jedi', the Wookiepedia (a 'Star Wars' encyclopaedia created by fans and widely consulted by users from all over the world) was infiltrated by a user that made anonymous changes to the page dedicated to Rose Tico, adding racist comments, changing her name to "Ching Chong Wing Tong", describing her as "stupid, autistic and retarded" and expressing desire that she die in a coma "because she is a dumbass bitch", demonstrating that the racist fans of 'Star Wars' possess a lot more hate than they do sophisticated vocabulary. These horrific attacks were not just directed at the character, but also at the performance and physical appearance of the actress, who became a target for racist insults and comments about her weight. 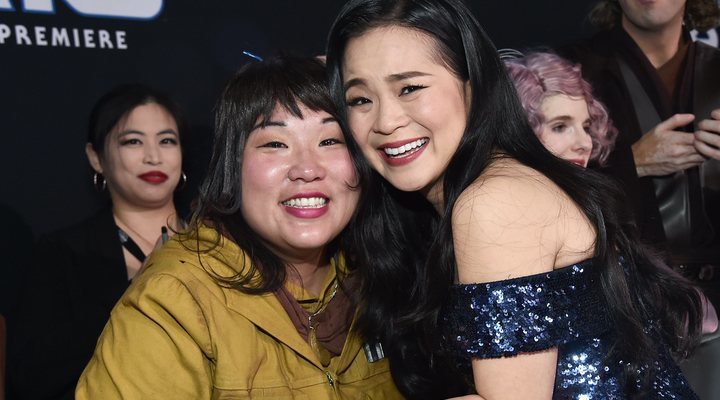 Whilst the rest of us just carried on with our day-to-day, Kelly Marie Tran was caught up in this living hell for months, with personal threats and insults hurled at her constantly on social media. In June 2018, the actress deleted all of the posts on her Instagram profile and changed her bio to the words "Afraid, but doing it anyway". Two months later, The New York Times launched an article penned by Tran in which she said that she had begun to believe the insults that were thrown at her so regularly: "Their words seemed to confirm what growing up as a woman and a person of colour already taught me: that I belonged in margins and spaces, valid only as a minor character in their lives and stories".

Everything only quietened down because Kelly Marie Tran essentially disappeared from the scene for a while and threw herself into the filming of 'The Rise of Skywalker'. When she appeared at the Star Wars Celebration held in Chicago in April 2019, the audience present greeted her with a standing ovation. It was the triumph of the Light Side: a few racist and misogynistic trolls had failed to halt progress, a forward movement embodied by an Asian woman who had returned stronger than ever, ready to save the galaxy when Episode IX premiered that holiday season.

Or, at least, that's what we thought before we saw the film and Rose's became the saddest story of the whole trilogy.

The Disappearance of Rose Tico

With the release of 'Star Wars: The Rise of Skywalker' in the cinemas, received by critics as lukewarm and somewhat disappointing, we can verify that, amongst all of the concessions that Lucasfilm has made on behalf of these trolls who declare themselves "true fans" for having spent more money than anyone on merchandising, the person who came out of things the most negatively effected is Kelly Marie Tran. 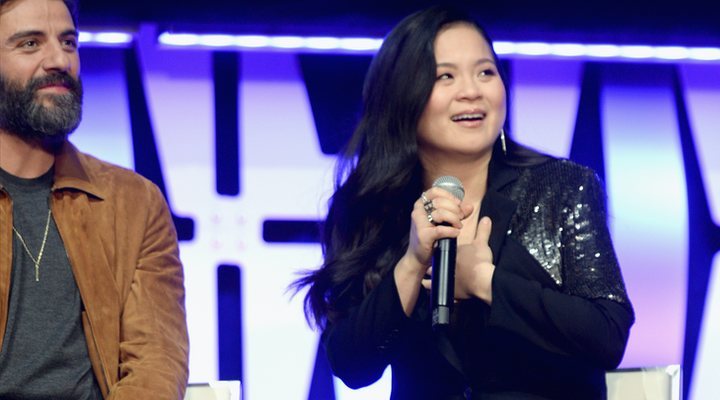 The addition of Rose was one of the best aspects of 'The Last Jedi' as a hyperactive chatterbox who developed an almost romantic connection with Finn, played by John Boyega. Yet, in this film, she disappears almost completely. No, to disappear would almost have been a better option for the actress, who is instead forced to remain in the background with hardly any lines of dialogue. Rose Tico is no longer front and centre and is completely ignored by her supposed love interest, Finn, who is instead paired off with an African-American woman (Naomi Ackie playing one of the many new roles introduced in the film only to completely underdeveloped as a character), only added to a silence anyone who "ships" Finn with a woman not of his own race or, worse yet, with a man.

"They did a Jar Jar Binks on her", the fans say, referring to the most hated character of the prequel trilogy orchestrated by George Lucas in the early 2000s. Another inoffensive secondary character thought of as mere comic relief, Jar Jar Binks was met with such negative reactions that the actor who portrayed him, Ahmed Best, ended up contemplating suicide. Despite the fact that Jar Jar was designed and animated on a computer (as was the case with everything in the prequels, more or less), Best, another person of colour, sustains that the rejection of this character continues to affect his career 20 years later.

The hatred so disturbingly nurtured by such toxic 'Star Wars' fans led them to form a pack of sorts in opposition to Kelly Marie Tran, an actress belonging to a minority community who was only 28 years old at the time. Rose Tico was not the best character of the entire saga, but this was never the actress's fault. Lucasfilm should have made her one of the main protagonists of 'The Rise of Skywalker', a gesture that would have provided sent a very clear message to certain members of the public. Instead, Kathleen Kennedy's company and the team directed by J.J. Abrams hid her in the wings, like some parents who take their children out of school after they become victims of bullying.

In the few shots in which Rose appears in the recently released Episode IX, Kelly Marie Tran is clearly subdued, which is the same attitude she maintained in many interviews during the promotional tour. 'Star Wars' must have become an awful sort of prison for her in which she is forced to confront her worst fears on a regular basis. A saga that talks about embracing the light has tossed her to those who preach violence, hatred and exclusion. Luckily for her, 'Star Wars' is fiction, a handful of fantastical films surrounded by far too much hype once the credits have rolled. 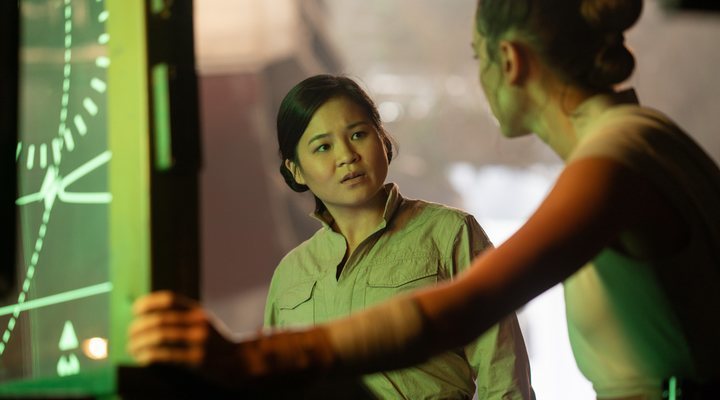 'The Rise of Skywalker' could seem like a film that is as ideologically absent as it is lifeless in its narrative or empty of emotion. But let's not let that fool us; it's the small details such as this "cleansing" of C-3PO's memory that make it clear that Lucasfilm has taken sides in a conflict that has divided the 'Star Wars' fanbase for years. We can all identify with the fight of the Resistance, but what little discourse there is in the film resonates more strongly with the "playing the victim" position often appropriated by Nazis in recent years: you're not alone, there are others like you out there who also want to fight against those trying to impose their lifestyle. They feel threatened by minorities (for them, we're the Empire, or the First Order, or whatever it was called in this film), but we're not imposing anything. We're simply fighting so that nobody has to live on the margins any longer. We don't want a random, fleeting kiss between two women that the camera quickly pans away from; we want real people.

Much like Kelly Marie Tran, and in spite of Lucasfilm: afraid, but doing it anyway. With or without the Force.