'Star Wars: The Rise of Skywalker' is more overwhelming than emotional in its struggle to close the saga

The title sums it up. A feeling of "it's too much" that's impossible to shake off once you've left the theatre. The lights fade, the credits roll, and so much has happened so very intensely that the mix of nostalgia and emotion with which many fans would already have entered the theatre continues to overwhelm you... It's a lot to process. Once you manage it, however, you realise that there are certain aspects of the film that don't convince the viewer, certain answers shoehorned in too neatly, but, as a whole, we can safely say that this finale was "satisfactory". J.J. Abrams seizes the controls but is forced to play on a setting created by Rian Johnson, and this dynamic really shows. In having to build on an already exemplar foundation - a foundation that he did not create - Abrams falters with the film's pacing in a few instances, indicating that when you take away him away from the nostalgia that infused every scene of 'The Force Awakens', the spacecraft enters some turbulence, so to speak. It doesn't make the film crash and burn, of course, but it does make it lose some charisma. By opening so many possibilities with 'The Last Jedi', Rian Johnson has really complicated things for Abrams, simply because many of the concepts implanted in the saga by Johnson work by taking risks, not by conforming to expectation. Abrams's desire to conform manifests itself in two things in particular that he clings to in every second of this film: that near-maniacal eagerness to have answers ready for absolutely everything, and his intention of eliciting a positive reaction from the majority of the fandom, a lofty goal that seems to burden the film on numerous occasions. 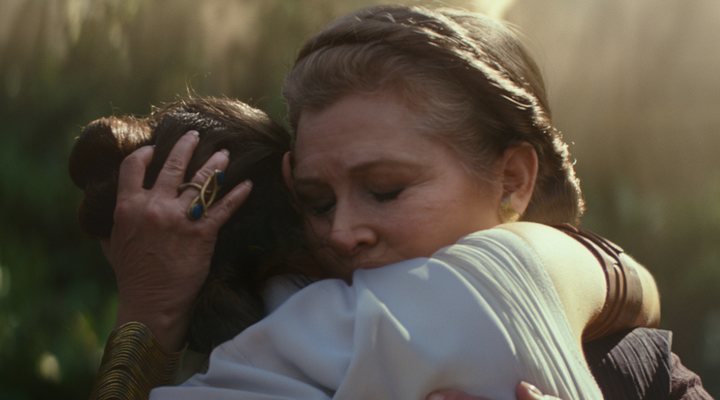 What I'm referring to specifically is a string of creative decisions that seem poorly done; decisions that Abrams just couldn't pull off without a strong creative hand willing to take risks in order to imbue scenes with a new, exciting life. This happens on multiple occasions and, in one such instance, comes off as extremely dramatic due to this perceived need to hit new heights of emotion and "epicness". This passing of directorial responsibility from Johnson to Abrams did not need to sacrifice fluidity in its pursuit of the dramatic. Let me explain this directorial shift a little more: on the one hand we have Abrams, logically more comfortable with the concepts he himself planted in 'The Force Awakens', who then reclaims his place in the director's seat and attempts to rework some of the ideas contributed to the franchise by Rian Johnson to suit his own ends. Abrams does support some of the more controversial decisions made by his colleague, but he drags them out, explains them in a way that is more overwrought than subtle, harnessing them in an attempt to add depth to the characters. Whilst Johnson was emotional and based a lot of his decisions on the feelings and psychological mindsets of the characters, Abrams is more direct, practical, visual. He takes the same concepts and exploits them more for show than for any exploration of the hidden depths of emotion. These are two radically different styles of filmmaking. And so, although I can't deny that I find 'The Last Jedi' to be the superior film with regards to the directions taken with one story or another and the radically distinct way Johnson interprets certain concepts...we'll let the debate begin, shall we?

What is clear with this film is that if you did not enjoy the humour of 'Episode VIII' then you're in luck: in 'The Rise of Skywalker', the laughs are conspicuous for their absence in any line of memorable dialogue (other than one moment that borrows certain words and a particular delivery that will be very familiar to followers of the saga). The script, rather unsurprisingly, comes across rather poorly in the few moments in which it attempts to land jokes that never quite have the desired effect. Regarding Abrams's reworking of Johnson's ideas, he perhaps could have justified this petulant ignorance of 'The Last Jedi' if he had excused it by saying that he was simply trying to erase the aspects of that instalment's story that were met with criticism by so many fans, whilst also maintaining a unified tone within the trilogy. However, at least where humour is concerned, 'The Rise of Skywalker' is not so much a natural progression from the contribution to the saga by the critically-acclaimed 'Knives Out' director as it is a perpetuation of the sarcastic inflections that define the humour that certain characters in that faraway galaxy have always possessed. This is not quite satisfying enough, however, when added to the fact that in a film full of such incessant action and adventure, any type of comic relief would have been welcomed as an opportunity for fans to finally take a breath.

On top of this, it's confusing as to why, having established that J.J. Abrams avoids risk considerably in 'Episode 9', so many new characters are introduced. Of course, if we had sufficient time to do justice to the pre-established characters and to answer all of the questions posed in earlier instalments, it would be understandable, but what sense does it make to shoehorn in the new character portrayed by Keri Russell? The same goes for the many other new faces that we won't mention in this particular review for the sake of avoiding spoilers. What I'm trying to say is that the decision to introduce new characters only to not then develop them sufficiently is acceptable to a certain extent if we think that these new additions are likely to have some sort of afterlife in the saga via the many new corners of the 'Star Wars' universe set to be opened up in the future but, in all honesty, an incredible number of new characters are added into this film considering the fact it's a conclusion intended to wrap up a story, not begin another one. Admittedly, this doesn't slow down the pacing of the film too much, but it is one more burden added onto the elements of the story that the film's 2h 21 minute running time already has to resolve whilst also succeeding in blowing our minds, connecting all of the dots, adding depth to characters and concepts of already galactic proportions...One thing's for sure and that's that this film will not bore anybody. It will, however, be difficult for some viewers to stomach the onslaught of so much new information at once. 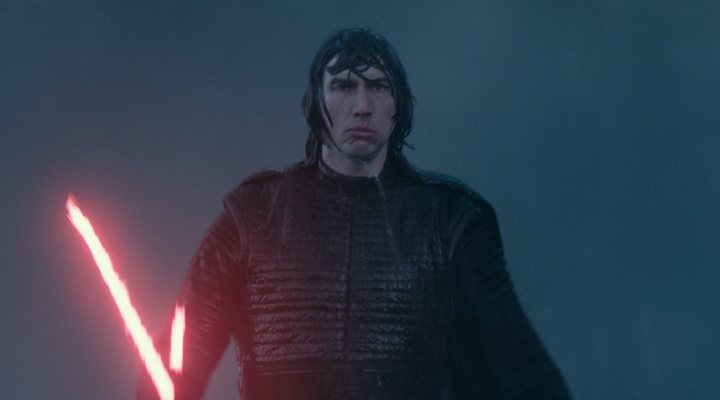 In contrast to this lack of substance in the new additions to the crew, the main cast members are put to full use and deliver intelligent, well-thought-out performances. Adam Driver's performance comes to mind as he manages to infuse Kylo Ren with an incredible humanity that can be seen fighting for release in the internal conflict plastered across his face constantly. If the emotional journey of this "villain" is so fully realised, it is thanks to the mastery of an actor that captivates the audience with his every gesture whenever he's on screen, though its the highly-charged, tortured gaze sported by Driver throughout that seals the deal regarding his impeccable performance in the film. For her part, Daisy Ridley also gives a solid performance, though she doesn't quite reach the heights of Driver. Together the two form a magnetic duo that underlines the connection that has bound them since the very beginning, and it is this relationship that is by far the most memorable not just of the film, but of the trilogy. John Boyega finally found the presence he was looking to give his character in the early instalments; and Oscar Isaac's Poe goes on a less radical journey than he did under Johnson, but it's a path that seems to be leading him to the same destination nonetheless: as the logical successor to lead the Resistance.

Is 'The Rise of Skywalker' Fan Service or Fuel for the Haters?

From the perspective of those who can never have enough light saber battles in their lives, Abrams directs some undoubtedly spectacular fight scenes, perhaps not quite so original as those have been drawing new fans to the saga since, for example, the animated 'Star Wars Rebels', but they're certainly set on astonishing the viewer and, although to a lesser extent, on providing some support for the emotional arcs of the characters in question. 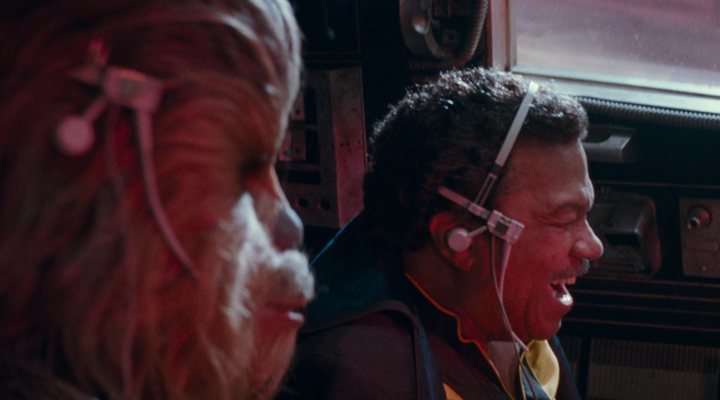 Regarding visuals, there's nothing particularly memorable that 'The Rise of Skywalker' adds to the saga. Nothing like watching in awe as a certain spacecraft was unveiled; no scene even remotely similar to the interplay of colour and concepts that we enjoyed thanks to the salty sandscapes of Crait. To use a highly sophisticated descriptor, it's just...meh. Not good, not bad. Just not interesting or original enough to be of note. It's almost as though Abrams has been engulfed and overwhelmed by the 'Star Wars' universe as opposed to managing it for himself. Of course, his desire to maintain a consistent tone and create a sense of unity with the previous instalments is understandable, but Abrams is so dedicated to achieving this that the film borders on insipid at times. The only moments in which this is not the case do not come down to the cinematographic style with which Abrams could have taken risks and hedged his bets, but rather from the twists in the story that he had no choice but to include. In this sense, the film is weighed down by this feeling that it is keenly aware of the pressure from the fandom, something that never seemed to affect the decisions made by the rest of the filmmakers involved with the saga, but somehow Abrams has managed to follow up even his most dramatic decisions with a strong aftertaste of fan service. I mean, they work perfectly within the film and are well-justified, but they lack a certain warmth that the film seems to have lost in its pursuit of meaningless theatricality at times.

There's hardly any time in 'The Rise of Skywalker' in which you can simply sit back and enjoy it, nor for the soundtrack to rise to a dramatic crescendo as it laments the end of the Skywalker saga...but I'll be damned if there's anything that Abrams hasn't managed to put a neat little bow on and label "finished". In a way, that's the biggest burden born from by J.J. Abrams's desire to please: it's so intense that at times he forgets that it's better to just make the fans feel, period. Regardless of what that emotion may be.

The Best: The emotional arc of Kylo Ren, so effective largely thanks to the performance given by Adam Driver.

The Worst: Leia's goodbye. You could use the "special circumstances" as an excuse, but the fact is that it still could have been done better.