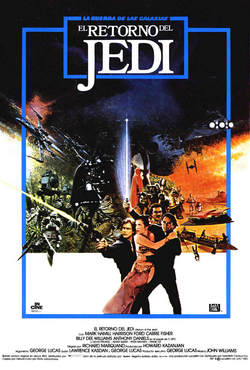 'Return of the Jedi', the latest installment of the original trilogy, begins with the rescue mission led by Luke Skywalker (Mark Hamill) and Princess Leia (Carrie Fisher), who decide to venture into the dangerous den of Jabba the Hutt, the most feared gangster in the galaxy, to free Han Solo (Harrison Ford) from his carbonite prison. The plot thickens when the heroes fall prisoners of the evil Hutt, who decide to keep Leia as a slave while condemning Luke to be eaten by a Rancor. Finally, the team manages to escape, allowing Luke to return to Dagobah to complete his Jedi training. While the princess, Han Solo and the others goes to the moon of Endor, a satellite inhabited by the small Ewoks, a creatures that don't hesitate to lend their support to their visitors. It is in this forested planet where the rebel forces fight for the last time a defenseless and incomplete Death Star in the battle that will decide the fate of the galaxy. Richard Marquand directed this episode VI on a screenplay by George Lucas and Lawrence Kasdan.

David Lynch and 'The Return of the Jedi' 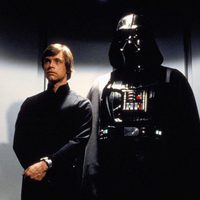 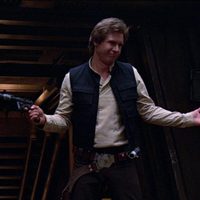 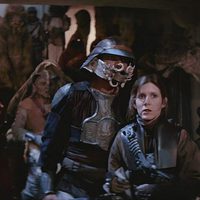 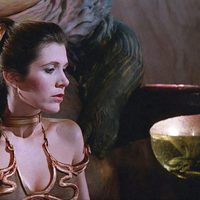 ?
Write your own 'Star Wars: Episode VI - Return of the Jedi' review.

Carrie Fisher complained about her wardrobe in the first two films of the original trilogy saying that the outfits were so long, you could not tell "she was a woman". The result of these complaints was the little outfit that she wore as Jabba's slave in 'Star Wars: Episode VI - Return of the Jedi'. George Lucas fired Gary Kurtz, his friend and producer of the first two films of the original trilogy, because he did not agree with the director when he said that the audience didn´t mind about the story and only wanted a good show. One of the heels that Carrie Fisher wore in the scene where she clamber on top of Jabba the Hutt accidentally pierced the puppet's latex hitting Mike Edmonds, the one responsible for moving the tail.