Australia bushfire crisis: Chris Hemsworth and other celebrities pledging their support and donations to the cause

Several celebrities have taken to social media to pledge both their support and their generous donations to the bushfire appeal designed to provide aid and relief to the citizens of Australia and the volunteer forces working tirelessly to minimise the damage caused by the fires that have been ravaging the country since September. 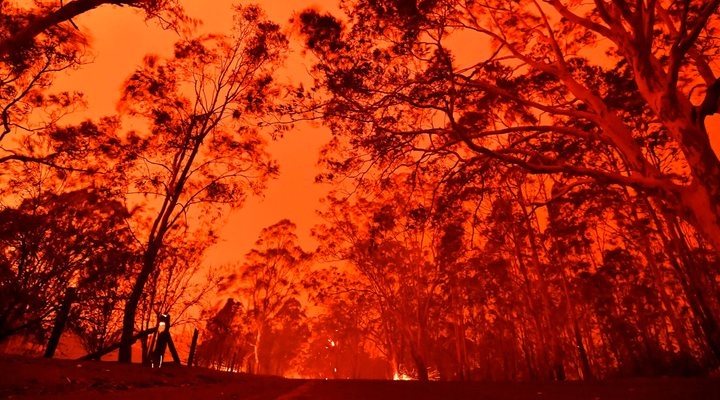 Across Australia, particularly in the states of New South Wales and Victoria, these fires have caused the deaths of approximately 480 million animals and insects as well as an estimated 24 people over the past few months. In addition to this loss of life, thousands of houses and 6.3 million hectares of bush, forest and parks have been destroyed, according to the BBC. The world has been left reeling from the images of the effects of this climate disaster on both Australia's people and its lands, with many desperate to send aid overseas to help the firefighters - many of whom are working on a volunteer basis only - to curb the blazes.

With news of the crisis reaching Hollywood, several celebrities have harnessed their huge social media followings both to pledge donations to the bushfire appeal and to raise awareness amongst their fanbase with regards to how they can offer aid and donate to the organisations providing relief. One such actor to publicly pledge their support to Australia is Chris Hemsworth, who took to Instagram to announce that he and his wife Elsa Pataky would be donating 1 million dollars to the cause and to encourage his 39 million followers to offer their support in any way that they can.

Hi everyone. Like you, I want to support the fight against the bushfires here in Australia. My family and I are contributing a million dollars. Hopefully you guys can chip in too. Every penny counts so whatever you can muster up is greatly appreciated. In my bio I've added links to support the fire fighters, organisations and charities who are working flat out to provide support and relief during this devastating and challenging time. Beyond appreciative to everyone around the world for their well wishes and donations. It really does make a difference, so dig deep! Love ya.

In the sombre video posted on his Instagram page, the actor, best known for his portrayal of the Norse god of thunder Thor in the films of the Marvel Cinematic Universe, urges his fans to use the links in his bio to offer well wishes and monetary aid to the fire services and charities that are working tirelessly across the country to provide support. "Like you, I want to support the fight against the bushfires here in Australia," says the native Aussie. "My family and I are contributing a million dollars. Hopefully you guys can chip in too. Every penny counts so whatever you can muster up is greatly appreciated".

The upcoming sequel led by the inimitable Norse deity, 'Thor: Love and Thunder', was set to commence shooting in Australia this summer, but director Taika Waititi has since said that the dangers posed by the bushfires may delay filming whilst the tackling of the crisis takes first priority.

Hemsworth is not the only celebrity to utilise their fame and social media following to raise awareness regarding the bushfire appeal. Nicole Kidman ('Big Little Lies') also took to Instagram to pledge 500,000 dollars to the Rural Fire Service as well as providing links to the local state fire services so that her followers can make much-needed donations of their own. Musicians Elton John and Pink have also stepped up to offer monetary aid, pledging 1 million dollars and 500,000 dollars respectively.

Our family's support, thoughts and prayers are with everyone affected by the fires all over Australia. We are donating $500,000 to the Rural Fire Services who are all doing and giving so much right now.

I am totally devastated watching what is happening in Australia right now with the horrific bushfires. I am pledging a donation of $500,000 directly to the local fire services that are battling so hard on the frontlines. My heart goes out to our friends and family in Oz ?? pic.twitter.com/kyjDbhoXpp

Amongst those opting to use platforms such as Twitter and Instagram to openly voice their support of Australia are Selena Gomez ('A Rainy Day in New York'), Jonathan Van Ness ('Queer Eye'), Naomi Watts ('Luce') and Australia native Hugh Jackman ('The Greatest Showman'), who tweeted an image of the fires with the caption "this is an immense tragedy for our home country". Fellow Australian A-listers Russell Crowe ('The Loudest Voice') and Rebel Wilson ('Pitch Perfect') also released images of both the relief efforts and the damage caused by the bushfires. Wilson went even further than donating by taking herself, and her skills as a hostess, to auction. The actress has recently auctioned off an exclusive lunch hosted at her own home, a move which has since raised 100,000 dollars for the relief effort.

Absolutely devastated by the fires in Australia. Praying for everyone affected and all of the first responders. I'm making a donation and would love if you would consider doing the same if you can. Swipe up ?? https://t.co/aEqW5SPKPG

After having had the chance to film a special episode of @queereye in Yass, Australia in 2018 I fell in love. My heart has been broken these last days watching the situation deteriorate there. The people, animals, and spirit of Australia is so beautifully unique & seeing how much everyone has banded together to help is major especially @celestebarber and everything shes has done to raise funds for her country in this crisis. Go to the link in my bio & donate to @celestebarber Australia fundraiser & if you're in a position to donate anything that would be a very much appreciated. It's estimated over 480 MILLION animals are dead & as fires are continuing to grow. They will surly need all the support they can get ????

This was my last eve in Byron, NSW, Australia. To get a sense of how beautiful the wildlife regularly sounds... Please turn up the volume. The fires have been truly horrendous. It's so upsetting and worrying. So much wildlife already lost. And still much of the summer ahead. My heart goes out to those who've lost loved ones and homes. Big gratitude to the brave firemen who literally haven't stopped during the holidays!! ? Heartbroken for all the animals, plants and land... ? for rain ? #tbt ????

We want to express our deep gratitude to the people in Australia who are fighting these devastating bushfires Our hearts are with everyone impacted especially those who have lost homes businesses and loved ones This is an immense tragedy for our home country #AustraliaBushfires pic.twitter.com/xcsPWSpDeS

Still burning... they say a wind change might crank things up again in the valley. I hope wherever you are in Australia, or California or anywhere else facing bushfires , that you and yours remain safe.

Shout out to @zookeeper_chad from @featherdalewildlifepark who has been helping rescue animals from the NSW bushfires and is just an all round legend. I loved cuddling our gorgeous Australian animals ? and we gotta work hard to protect them ?and our environment x

Actress Emmy Rossum ('Shameless') appealed to her audience with an Instagram photo of herself caring for a koala that suffered from severe injuries in the fires. "Swipe of see me and our girl Ember, healing from her intense burns", says the caption, along with a plea for her followers to donate to a Go Fund Me fundraiser aiming to raise money to save animals like Ember from the damage caused by the bushfires.

Swipe to see me and our girl EMBER, healing from her intense burns. Pls consider donating if you can. ? link in bio #bushfiresaustralia #australia

Many celebrities also chose to highlight how the worsening climate is behind these tragedies, with Leonardo DiCaprio ('Once Upon a Time In...Hollywood'), Sharon Stone ('Basic Instinct') and Ellen DeGeneres ('Finding Dory') all reposting a statement from young environmental activist Greta Thunberg, who criticises the governmental response to the crisis. "All of this still has not resulted in any political action. Because we still fail to make the connection between the climate crisis and increased extreme weather changes and nature disasters," states an impassioned Thunberg alongside the now-famous image of a kangaroo standing before a burning building. "That has to change. And it has to change now. My thoughts are with the people of Australia and those affected by these devastating fires".

Hopefully, with so many influential names taking to social media to offer resources that allow the masses to educate themselves about the situation in Australia, those changes have finally begun.